Beowulf (AIM: BEM; Spotlight: BEO), is pleased to provide an update on the progress being made by the Company’s wholly owned Finnish subsidiary Grafintec Oy (“Grafintec”) and the results of an electromagnetic (“EM”) survey and assays for the Rääpysjärvi flake graphite prospect and the Company’s broader raw material supply initiatives in support of its ambitions to develop a Finnish graphite anode value chain.

The development of downstream capabilities is a key part of Grafintec’s strategy and the Company continues to form partnerships with other companies to achieve this. On 26 September 2022, Beowulf announced that Grafintec had signed a Memorandum of Understanding (“MoU”) with Qingdao Hensen Graphite Ltd (“Hensen”), which includes an agreed framework and key terms on which both companies are collaborating with regards to establishing an anode materials hub in Finland.

The Company’s most advance natural flake graphite project, Aitolampi, has an Indicated and Inferred Mineral Resource of 26.7 Mt at 4.8 per cent TGC for 1,275,000 tonnes of contained graphite, possessing almost perfect crystallinity, an important prerequisite for high tech applications such as lithium-ion batteries. The Mineral Resource was estimated by CSA Global of Australia in accordance with the JORC Code, 2012 Edition. In addition to Aitolampi, the Company has other graphite exploration prospects, including Rääpysjärvi.

While projects in Finland are still in development, the Company has other initiatives to secure raw materials supply, natural flake graphite and recycled graphite, to feed downstream processing.  In May this year, Grafintec signed an MoU with Dominik Georg Luh Technografit GmbH (“Technografit”), establishing the basis for a commercial partnership for securing sustainable supply of natural flake graphite for Grafintec’s planned graphite anode materials plant; samples are now being tested by Hensen and processed to anode material. Also, the Company has testwork programmes on recycled graphite containing waste to assess whether it can be processed to suitable feedstock for anode materials production.

“We follow the announcement of our partnership with Hensen and firm plans for anode materials production, announced on 26 September, with positive exploration results, as Grafintec continues to explore and seeks to expand both its resource footprint and inventory of natural flake graphite in Finland.

“The work carried out by the Geological Survey of Finland (“GTK”) for the Company follows a solid history of graphite exploration at Rääpysjärvi and is part of the MoU signed between GTK and Grafintec earlier this year, establishing a framework and a platform to promote cooperation in the fields of graphite exploration, mineral processing, and circular economy as pertaining anode materials for the lithium-ion battery market and other value-added markets.

“The Company is focused on long-term sustainable graphite supply to its downstream projects, and with Rääpysjärvi and Aitolampi being located close to one another, as a concept, there could be possible synergies for future development of these two sites, such as shared processing infrastructure. In addition, we continue to develop options for securing supply of natural flake graphite in advance of mining in Finland, such as the MoU with Technografit, and ongoing testwork on graphite containing waste generated from recycling.

“Back to exploration, fieldwork is now continuing at Rääpysjärvi with detailed geological mapping and sampling in areas proximate to the newly identified EM conductive zones.  With new information, we will start drawing-up plans for a possible trenching and drill programme. I look forward to providing further progress updates on this work and our work with Hensen.”

The Rääpysjärvi exploration permit is located in the municipality of Tuusniemi in Eastern Finland, 8km north-northwest of the Aitolampi graphite project. In June 2022, GTK were contracted to carry out an EM survey. The survey used a portable GEM-2 instrument over an area of approximately five square kilometres. GEM-2 is a hand-held, digital, multi-frequency broadband EM sensor which measures the ground conductivity. High EM ground conductivity can be a typical indicator of graphite bearing rocks.

In addition, outcrops in the area have been mapped and sampled during fieldwork carried out in 2017 and in June 2022.  A total of eight grab samples from outcrops have been analysed with assays ranging between 0.52 and >50 per cent TGC.

The sample assaying  more than 50 per cent TGC (limit of the analysing methodology) was taken from a historic graphite quarry mined in the 1940s and situated close to the north-western limit of one of the largest EM conductive zones.

Six holes drilled by Outokumpu Oy in the 1980s have also been re-sampled and re-assayed for TGC. Two of the drill holes intersected significant graphite mineralisation: 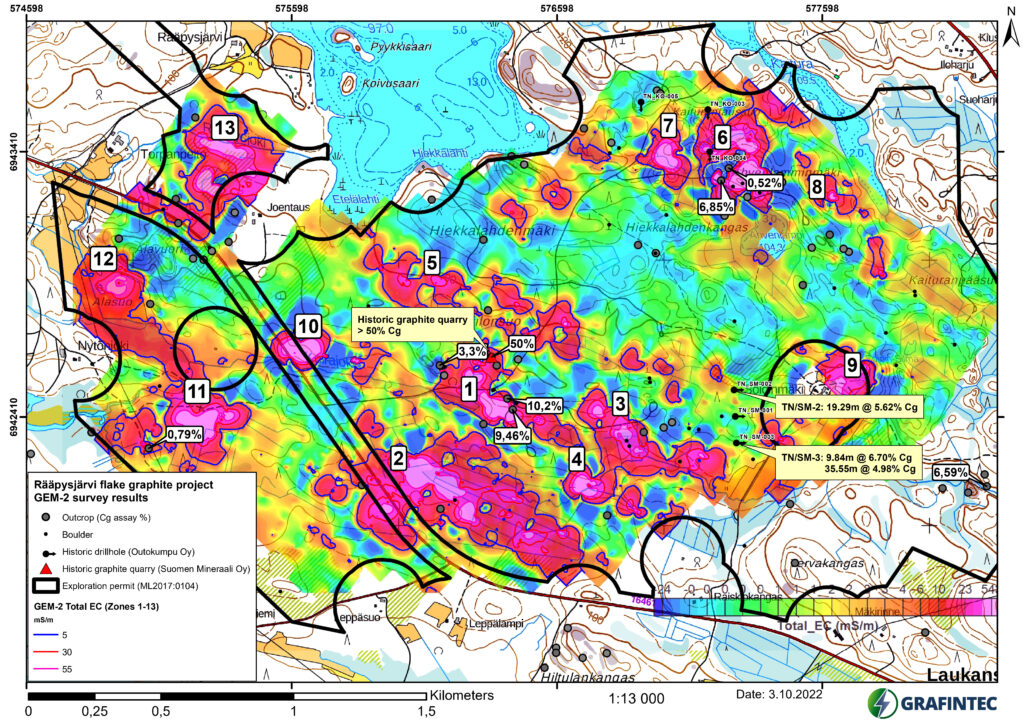 Figure 1: The map shows the location of the 13 EM conductive zones and TGC assay results from  outcrops and drilling.

Beowulf Mining’s 100 per cent owned subsidiary Grafintec Oy (“Grafintec”) is recognised in Finland as one of the main companies in the anode space and continues to be supported by Business Finland, the Finnish governmental organization for innovation funding and investments.

In 2021, Grafintec was granted EUR 791,000 funding by Business Finland as part of the BATCircle2.0 (Finland-based Circular Ecosystem of Battery Metals) consortium. The funding will be used to develop a sustainable technological solution, utilizing renewable energy, to spheronise and purify graphite within a Finnish industrial ecosystem, for use in the manufacture of lithium-ion battery anodes.

The project has three objectives, which are to: 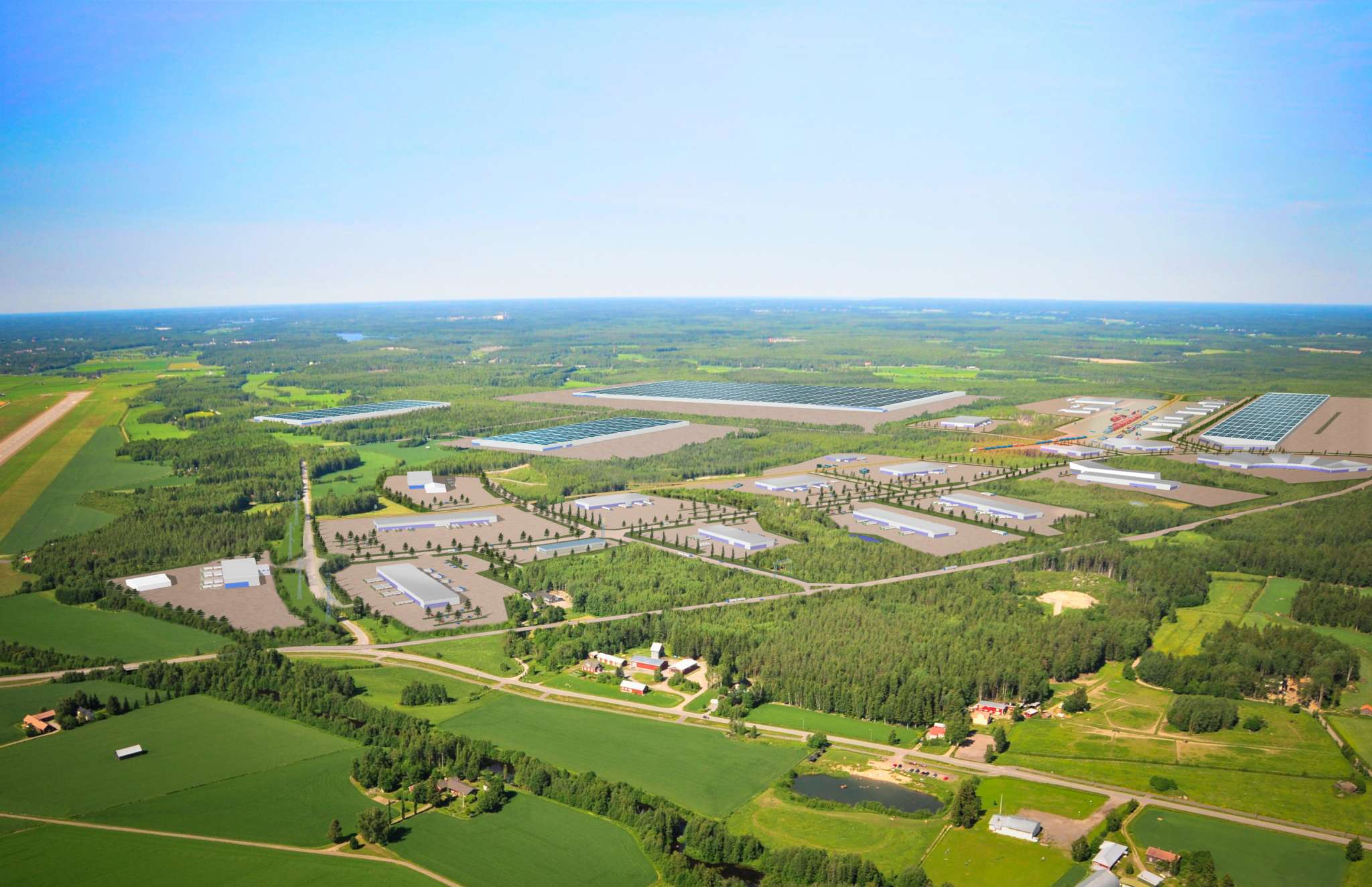 Finnish company Grafintec Oy and Indian company Epsilon Advanced Materials have made a plot reservation and signed a Memorandum of Understanding with the City of Vaasa to establish an anode materials production facility in the GigaVaasa area. – We are …