Beowulf (AIM: BEM; Spotlight: BEO), is pleased to provide an update on the progress being made by the Company’s wholly owned Finnish subsidiary Grafintec Oy (“Grafintec”) and the results and assays of a trenching programme for Grafintec’s wholly owned Rääpysjärvi natural flake graphite prospect.

“To have a high-grade intersection with 26 per cent Total Graphitic Carbon is tremendous and overall these are very encouraging assay results.

“Grafintec announced, in October, that the EM conductive anomalies at Rääpysjärvi are more extensive than seen at Aitolampi and therefore could indicate significant potential for a larger tonnage of graphite mineralisation in the area.

“Grafintec already has a Mineral Resource Estimate at Aitolampi of 26.7 million tonnes at 4.8 per cent TGC for 1,275,000 tonnes of contained graphite (as announced 30 October 2019), and our work at Rääpysjärvi is targeted at increasing our natural flake graphite resources to support the development of a Finnish graphite anode value chain.

“With only one of thirteen identified EM conductive zones trenched and assayed at Rääpysjärvi, we are excited about the potential and what continued geological mapping, sampling and possible drilling can deliver in 2023.”

In November 2022, Grafintec contracted a local entrepreneur to excavate trenches at four different locations within EM conductive Zone 1, see Figure 1. The trenches were mapped and sampled, after which representative samples were sent to ALS Finland Oy for chemical analysis of Graphitic Carbon by Infra-Red Spectroscopy using a LECO instrument. Flake graphite mineralisation was discovered in all four trenches:

RAA-TR1-22, RAA-TR2-22, and RAA-TR3-22 were all trenched within the main EM conductive Zone 1, while RAA-TR4-22 was trenched at the north-western limit of the same zone, along the south-eastern strike extension of the historic graphite quarry which has previously reported graphite contents from grab samples of more than 50 per cent TGC (limit of the analysing methodology). The sample of 1.0m at 26.00 per cent graphite in RAA-TR4-22 highlights the potential for localised and re-mobilised exceptionally high-grade graphite mineralisation yet to be discovered in the Rääpysjärvi area.

Previously, in June 2022, the Geological Survey of Finland (“GTK”) was contracted to carry out an EM survey. The survey used a portable GEM-2 instrument over an area of approximately five square kilometres. GEM-2 is a hand-held, digital, multi-frequency broadband EM sensor which measures the ground conductivity. High EM ground conductivity can be a typical indicator of graphite-bearing rocks.

In addition, outcrops in the area have been mapped and sampled during fieldwork carried out in 2017 and in June 2022.  A total of eight grab samples from outcrops have been analysed with assays ranging between 0.52 and >50 per cent TGC, see Table 1.

The sample assaying more than 50 per cent TGC (limit of the analysing methodology)  was taken from a historic graphite quarry mined in the 1940s and situated close to the north-western limit of EM conductive Zone 1.

Assay results from eight grab samples from outcrops analysed by ALS Finland Oy for Total Graphitic Carbon by IR Spectroscopy using a LECO instrument are shown in the table below: 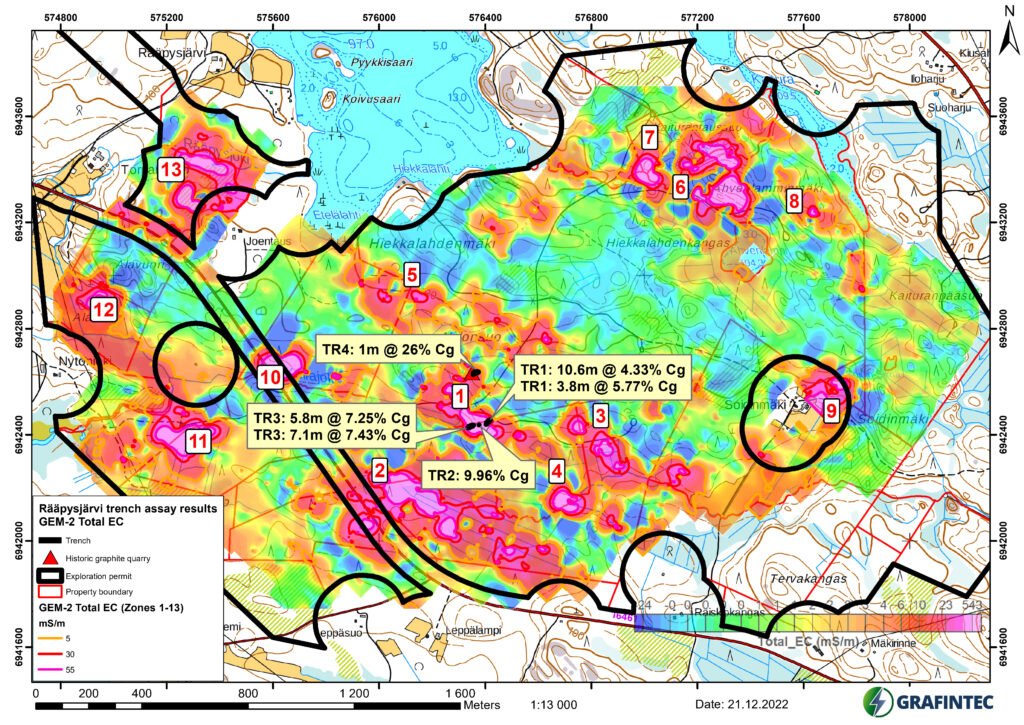 Beowulf Mining’s 100 per cent owned subsidiary Grafintec is recognised in Finland as one of the main companies in the anode space and continues to be supported by Business Finland, the Finnish governmental organization for innovation funding and investments.

In 2021, Grafintec was granted EUR 791,000 funding by Business Finland as part of the BATCircle2.0 (Finland-based Circular Ecosystem of Battery Metals) consortium. The funding will be used to develop a sustainable technological solution, utilizing renewable energy, to spheronise and purify graphite within a Finnish industrial ecosystem, for use in the manufacture of lithium-ion battery anodes.

The project has three objectives, which are to:

Natural graphite is greener than synthetic, leading auto makers to turn to mines for the mineral Mining companies are ramping up supplies of critical minerals for rechargeable batteries such as lithium, cobalt and nickel. Graphite, a key battery component, has …

The extension for the Pitkäjärvi ML2016:0040 exploration permit, including the Aitolampi flake graphite deposit, has been granted by the Supreme Administrative Court on 3.11.2022. The permit is valid for three years. Below are the stages and decision of the case. …